Start a Wiki
Tracy Edna Turnblad is a major protagonist in both the 1988 and 2007 films. She is the oversized optimistic, racially color blind daughter of Edna Turnblad and Wilbur Turnblad.

Tracy is a "pleasantly plump" girl, growing up in Baltimore, Maryland in the early 1960s. She is optimistic and lively, and not to mention blind to the racial segregation against blacks at the time. Her best friend is Penny Pingleton, a sheltered girl who lives at the mercy of her racist, religiously-devout mother, Prudence/Prudy Pingleton.

In the 2007 film, her dream is to take part in the Corny Collins Show, a racially-segregated teen dance show hosted by Corny Collins.She hears of an opening in the show's cast one day as she watches after school, and begs her mother to allow her to audition.

Tracy appears in or participates in the following songs. 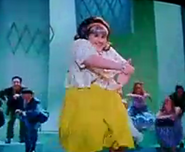 Tracy dances during her reveal on the Corny Collins show.

Tracy and her mother, Edna.

Tracy and Penny during "I Can Hear The Bells"
Add a photo to this gallery
Retrieved from "https://hairspraymovie.fandom.com/wiki/Tracy_Turnblad?oldid=9140"
Community content is available under CC-BY-SA unless otherwise noted.